Jacob Leonard was one of the first brewers to work directly with TRH in obtaining their harder-to-find beers. He was then Head Brewer at Walking Man Brewing, has since moved on to a position brewing at Widmer Brothers Brewing, and is still working with us and staying in touch. 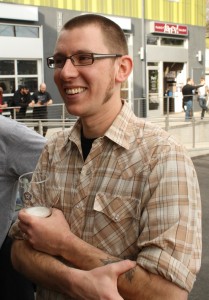 On Wednesday Night, he’ll drop in at TRH to spotlight one of his latest projects, Widmer’s Falconer’s IPA, part of their Rotator IPA Series of beers. In addition, we’ll also have the next offering in the Rotator Series, O’Ryelys IPA, as well as the very killer draft-only small batch NW Imperial Red.

Stop by to meet a man passionate about beer, and taste for yourself how much. Glassware specials, and prizes will be all up in this piece. It all starts at 6pm!